The Pinning Cheat Sheet is a technical guide to implementing certificate and public key pinning as discussed at the Virginia chapter's presentation Securing Wireless Channels in the Mobile Space. This guide is focused on providing clear, simple, actionable guidance for securing the channel in a hostile environment where actors could be malicious and the conference of trust a liability.

Users, developers, and applications expect end-to-end security on their secure channels, but some secure channels are not meeting the expectation. Specifically, channels built using well known protocols such as VPN, SSL, and TLS can be vulnerable to a number of attacks.

When to Add a Pin¶

When Do You Perform Pinning¶

You should pin anytime you want to be relatively certain of the remote host's identity or when operating in a hostile environment. Since one or both are almost always true, you should probably pin all the time.

If you are working for an organization which practices "egress filtering" as part of a Data Loss Prevention (DLP) strategy, you will likely encounter Interception Proxies. I like to refer to these things as "good" bad actors (as opposed to "bad" bad actors) since both break end-to-end security and we can't tell them apart. In this case, do not offer to allow-list the interception proxy since it defeats your security goals. Add the interception proxy's public key to your pinset after being instructed to do so by the folks in Risk Acceptance.

The idea is to re-use the exiting protocols and infrastructure, but use them in a hardened manner. For re-use, a program would keep doing the things it used to do when establishing a secure connection.

To harden the channel, the program would take advantage of the OnConnect callback offered by a library, framework or platform. In the callback, the program would verify the remote host's identity by validating its certificate or public key. See some examples below.

In order to decide what should be pinned you can follow the following steps. 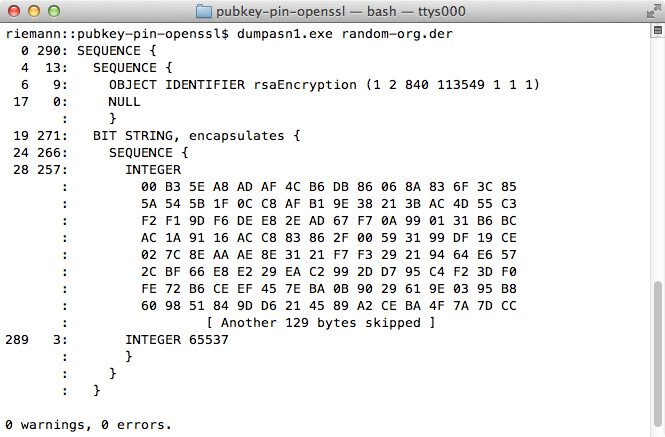 The three choices are explained below in more detail. I would encourage you to pin the subjectPublicKeyInfo because it has the public parameters (such as {e,n} for an RSA public key) and contextual information such as an algorithm and OID. The context will help you keep your bearings at times, and the figure to the right shows the additional information available. 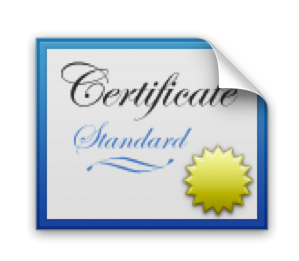 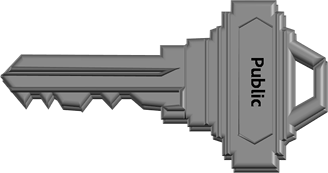 While the three choices above used DER encoding, its also acceptable to use a hash of the information. In fact, the original sample programs were written using digested certificates and public keys. The samples were changed to allow a programmer to inspect the objects with tools like dumpasn1 and other ASN.1 decoders.

This section discusses certificate and public key pinning in Android Java, iOS, .Net, and OpenSSL. Code has been omitted for brevity, but the key points for the platform are highlighted.

To enable pinning, the <pin-set> configuration setting can be used.

If devices running a version of Android that is earlier than N need to be supported, a backport of the Network Security Configuration pinning functionality is available via the TrustKit Android library.

Alternatively you can use methods such as the pinning from OkHTTP in order to set specific pins programmatically, as explained in the OWASP Mobile Security Testing Guide (MSTG) and the OKHttp documentation.

The Android documentation provides an example of how SSL validation can be customized within the app's code (in order to implement pinning) in the Unknown CA implementation document. However, implementing pinning validation from scratch should be avoided, as implementation mistakes are extremely likely and usually lead to severe vulnerabilities.

Lastly, if you want to validate whether the pinning is successful, please follow instructions from the introduction into testing network communication and the Android specific network testing chapters of the OWASP Mobile Security Testing Guide (MSTG).

Apple suggests pinning a CA public key by specifying it in Info.plist file under App Transport Security Settings. More details in the article "Identity Pinning: How to configure server certificates for your app".

TrustKit, an open-source SSL pinning library for iOS and macOS is available. It provides an easy-to-use API for implementing pinning, and has been deployed in many apps.

Otherwise, more details regarding how SSL validation can be customized on iOS (in order to implement pinning) are available in the HTTPS Server Trust Evaluation technical note. However, implementing pinning validation from scratch should be avoided, as implementation mistakes are extremely likely and usually lead to severe vulnerabilities.

Lastly, if you want to validate whether the pinning is successful, please follow instructions from the introduction into testing network communication and the iOS specific network testing chapters of the OWASP Mobile Security Testing Guide (MSTG).

.Net pinning can be achieved by using ServicePointManager. An example can be found at the OWASP MSTG.

Pinning can occur at one of two places with OpenSSL. First is the user supplied verify_callback. Second is after the connection is established via SSL_get_peer_certificate. Either method will allow you to access the peer's certificate.

Though OpenSSL performs the X509 checks, you must fail the connection and tear down the socket on error. By design, a server that does not supply a certificate will result in X509_V_OK with a NULL certificate. To check the result of the customary verification:

electron-ssl-pinning, an open-source SSL pinning library for Electron based applications. It provides an easy-to-use API for implementing pinning and also provides tool for fetching configuration based on needed hosts.

Otherwise, you can validate certificates by yourself using ses.setCertificateVerifyProc(proc).