Often when the security level of an application is mentioned in requirements, the following expressions are met:

These security requirements are too generic, and thus useless for a development team...

In order to build a secure application, from a pragmatic point of view, it is important to identify the attacks which the application must defend against, according to its business and technical context.

The objective of this cheat sheet is to provide an explanation of about what an Abuse Case is, why abuse cases are important when considering the security of an application, and further finally, to provide a proposal for a pragmatic approach to building a list of abuse cases and tracking them for every feature planned for implementation as part of an application. The cheat sheet may be used for this purpose regardless of the project methodology used (waterfall or agile).

Important note about this Cheat Sheet:

Why clearly identify the attacks¶

Clearly identifying the attacks against which the application must defend is essential in order to enable the following steps in a project or sprint:

In order to help build the list of attacks, the notion of Abuse Cases is helpful.

An Abuse Case can be defined as:

There are many different ways to define the list of abuse cases for a feature (that can be mapped to a user story in agile projects).

The project OWASP Open SAMM proposes the following approach in the Stream B of the Security Practice Requirements Driven Testing for the Maturity level 2:

Another way to achieve the building of the list can be the following (more bottom-up and collaboratively oriented):

Make a workshop that includes people with the following profiles:

During this workshop (duration will depend on the size of the feature list, but 4 hours is a good start) all business features that will be part of the project or the sprint will be processed. The output of the workshop will be a list of attacks (abuse cases) for all business features. All abuse cases will have a risk rating that allows for filtering and prioritization.

It is important to take into account Technical and Business kind of abuse cases and mark them accordingly.

On agile project, the definition workshop must be made after the meeting in which User Stories are included in a Sprint.

In waterfall projects, the definition workshop must be made when the business feature to implements are identified and known by the business.

Whatever the mode of project used (agile or waterfall), the abuse cases selected to be addressed must become security requirements in each feature specification section (waterfall) or User Story acceptance criteria (agile) in order to allow additional cost/effort evaluation, identification and implementation of the countermeasures.

Each abuse case must have a unique identifier in order to allow tracking throughout the whole project/sprint (details about this point will be given in the proposal section).

An example of unique ID format can be ABUSE_CASE_001.

The following figure provides an overview of the chaining of the different steps involved (from left to right): 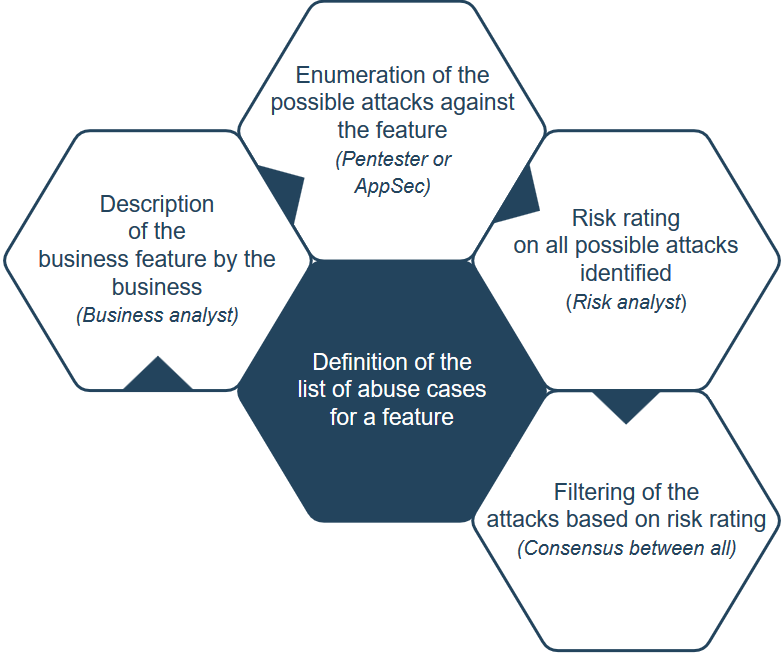 The proposal will focus on the output of the workshop explained in the previous section.

Step 1: Preparation of the workshop¶

First, even if it seems obvious, the key business people must be sure to know, understand and be able to explain the business features that will be processed during the workshop.

Secondly, create a new Microsoft Excel file (you can also use Google Sheets or any other similar software) with the following sheets (or tabs):

This is the representation of each sheet along with an example of content that will be filled during the workshop:

Use the spreadsheet to review all the features.

If the presence of penetration testers is not possible then you can use the following references to identify the applicable attacks on your features:

The spreadsheet contains (at this stage) the list of all abuse cases that must be handled and, potentially (depending on the capacity) corresponding countermeasures.

Now, there are two remaining task:

In order to track the handling of all the abuse cases, the following approach can be used:

If one or several abuse cases are handled at:

Using this way, it becomes possible (via some minor scripting) to identify where abuse cases are addressed.

As abuse cases are defined, it is possible to put in place automated or manual validations to ensure that:

Validations can be of the following kinds:

Adding automated tests also allow teams to track that countermeasures against the abuse cases are still effective/in place during a maintenance or bug fixing phase of a project (to prevent accidental removal/disabling). It is also useful when a Continuous Delivery approach is used, to ensure that all abuse cases protections are in place before opening access to the application.

Example of derivation of Abuse Cases as User Stories¶

The following section show an example of derivation of Abuse Cases as User Stories, here using the OWASP TOP 10 as input source.

Almost any source of data can be an injection vector, environment variables, parameters, external and internal web services, and all types of users. Injection flaws occur when an attacker can send hostile data to an interpreter.

As an attacker, I will perform an injection attack (SQL, LDAP, XPath, or NoSQL queries, OS commands, XML parsers, SMTP headers, expression languages, and ORM queries) against input fields of the User or API interfaces

As an attacker, I have access to hundreds of millions of valid username and password combinations for credential stuffing.

As an attacker, I have default administrative account lists, automated brute force, and dictionary attack tools I use against login areas of the application and support systems.

As an attacker, I manipulate session tokens using expired and fake tokens to gain access.

Rather than directly attacking crypto, attackers steal keys, execute man-in-the-middle attacks, or steal clear text data off the server, while in transit, or from the user's client, e.g. browser. A manual attack is generally required. Previously retrieved password databases could be brute forced by Graphics Processing Units (GPUs).

As an attacker, I execute man-in-the-middle attacks to get access to traffic and leverage it to obtain sensitive data and possibly get unauthorized access to the application.

As an attacker, I steal clear text data off the server, while in transit, or from the user's client, e.g. browser to get unauthorized access to the application or system.

As an attacker, I find and target old or weak cryptographic algorithms by capturing traffic and breaking the encryption.

Attackers can exploit vulnerable XML processors if they can upload XML or include hostile content in an XML document, exploiting vulnerable code, dependencies or integrations.

As an attacker, I exploit vulnerable areas of the application where the user or system can upload XML to extract data, execute a remote request from the server, scan internal systems, perform a denial-of-service attack, as well as execute other attacks.

As an attacker, I include hostile content in an XML document which is uploaded to the application or system to extract data, execute a remote request from the server, scan internal systems, perform a denial-of-service attack, as well as execute other attacks.

As an attacker, I include malicious XML code to exploit vulnerable code, dependencies or integrations to extract data, execute a remote request from the server, scan internal systems, perform a denial-of-service attack (e.g. Billion Laughs attack), as well as execute other attacks.

As an attacker, I bypass access control checks by modifying the URL, internal application state, or the HTML page, or simply using a custom API attack tool.

As an attacker, I manipulate the primary key and change it to access another's users record, allowing viewing or editing someone else's account.

As an attacker, I manipulate sessions, access tokens, or other access controls in the application to act as a user without being logged in, or acting as an admin/privileged user when logged in as a user.

As an attacker, I leverage metadata manipulation, such as replaying or tampering with a JSON Web Token (JWT) access control token or a cookie or hidden field manipulated to elevate privileges or abusing JWT invalidation.

As an attacker, I target default crypto keys in use, weak crypto keys generated or re-used, or keys where rotation missing is missing.

As an attacker, I find areas where the user agent (e.g. app, mail client) does not verify if the received server certificate is valid and perform attacks where I get unauthorized access to data.

As an attacker, I find and exploit missing appropriate security hardening configurations on any part of the application stack, or improperly configured permissions on cloud services.

As an attacker, I find unnecessary features which are enabled or installed (e.g. unnecessary ports, services, pages, accounts, or privileges) and attack or exploit the weakness.

As an attacker, I use default accounts and their passwords to access systems, interfaces, or perform actions on components which I should not be able to.

As an attacker, I find areas of the application where error handling reveals stack traces or other overly informative error messages I can use for further exploitation.

As an attacker, I find areas where upgraded systems, latest security features are disabled or not configured securely.

As an attacker, I find the server does not send security headers or directives or they are not set to secure values.

XSS is the second most prevalent issue in the OWASP Top 10, and is found in around two-thirds of all applications.

As an attacker, I perform reflected XSS where the application or API includes unvalidated and unescaped user input as part of HTML output. My successful attack can allow the attacker to execution of arbitrary HTML and JavaScript in my victim's browser. Typically the victim will need to interact with some malicious link that points to an attacker-controlled page, such as malicious watering hole websites, advertisements, or similar.

As an attacker, I perform stored XSS where the application or API stores unsanitized user input that is viewed at a later time by another user or an administrator.

As an attacker, I perform DOM XSS where JavaScript frameworks, single-page applications, and APIs that dynamically include attacker-controllable data to a page is vulnerable to DOM XSS.

Exploitation of deserialization is somewhat difficult, as off-the-shelf exploits rarely work without changes or tweaks to the underlying exploit code.

As an attacker, I find areas of the application and APIs where deserialization of hostile or tampered objects can be supplied. As a result, I can focus on an object and data structure related attacks where the attacker modifies application logic or achieves arbitrary remote code execution if there are classes available to the application that can change behavior during or after deserialization. Or I focus on data tampering attacks such as access-control-related attacks where existing data structures are used but the content is changed.

While it is easy to find already-written exploits for many known vulnerabilities, other vulnerabilities require concentrated effort to develop a custom exploit.

As an attacker, I find common open source or closed source packages with weaknesses and perform attacks against vulnerabilities and exploits which are disclosed

Exploitation of insufficient logging and monitoring is the bedrock of nearly every major incident. Attackers rely on the lack of monitoring and timely response to achieve their goals without being detected. In 2016, identifying a breach took an average of 191 days so plenty of time for damage to be inflicted.

As an attacker, I attack an organization and the logs, monitoring systems, and teams do not see or respond to my attacks.

All figures were created using https://www.draw.io/ site and exported (as PNG image) for integration into this article.

All XML descriptor files for each schema are available below (using XML description, modification of the schema is possible using DRAW.IO site):