Network segmentation is the core of multi-layer defense in depth for modern services. Segmentation slow down an attacker if he cannot implement attacks such as:

The main goal of this cheat sheet is to show the basics of network segmentation to effectively counter attacks by building a secure and maximally isolated service network architecture.

Segmentation will avoid the following situations: 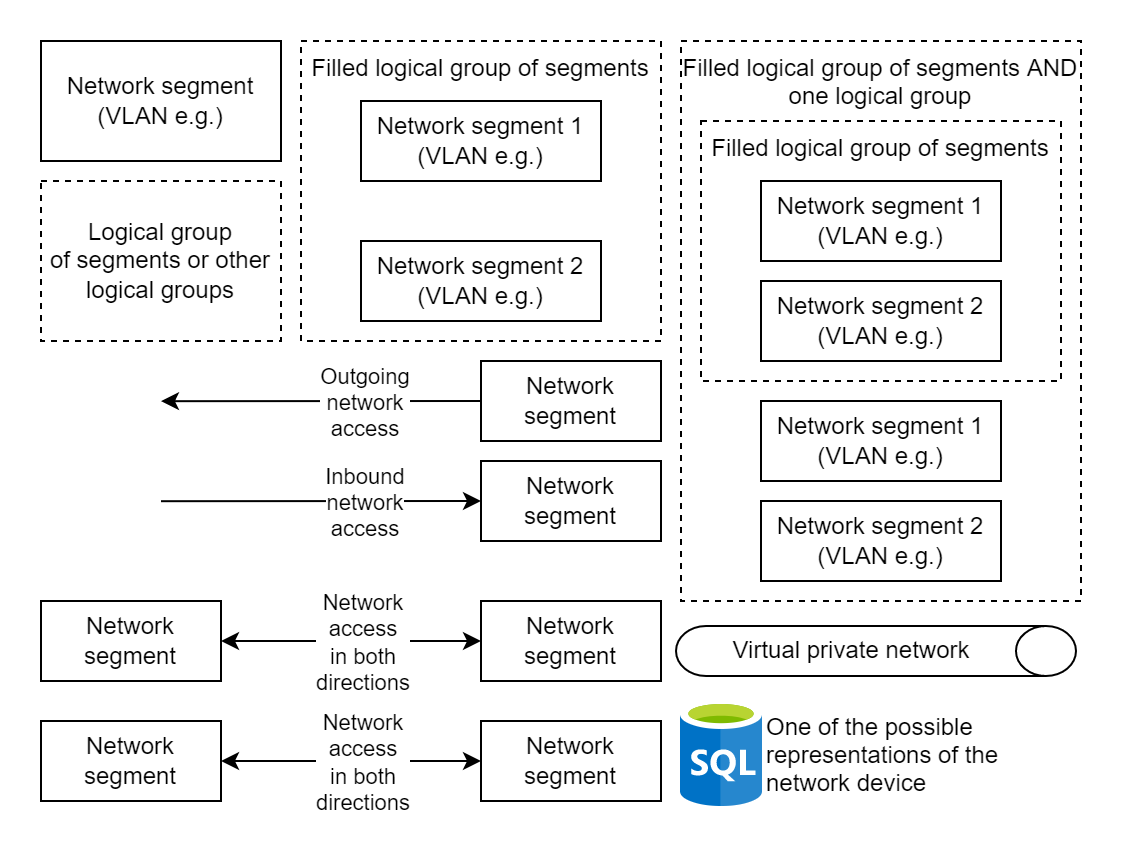 In the image above, traffic passes through two firewalls with the names FW1 and FW2

In the image above, traffic passes through one firewall, behind which there are two VLANs

Further, the schemes do not contain firewall icons so as not to overload the schemes

FRONTEND - A frontend is a set of segments with the following network elements:

MIDDLEWARE - a set of segments to accommodate the following network elements:

BACKEND - a set of network segments to accommodate the following network elements:

The following example shows an organization's local network. The organization is called "Сontoso".

Usually some information systems of the company interact with each other. It is important to define a firewall policy for such interactions. The base allowed interactions are indicated by the green arrows in the image below: 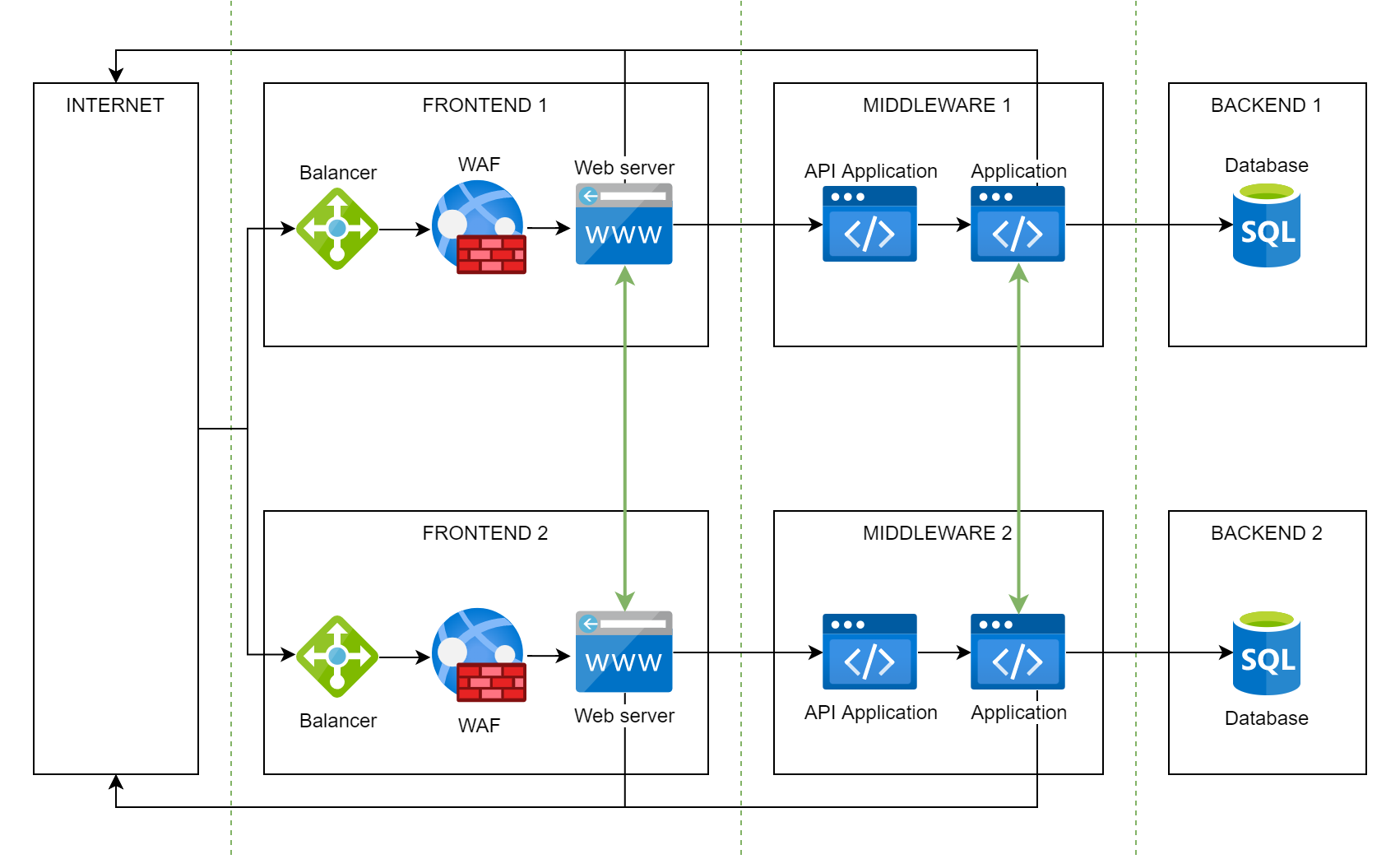 The image above also shows the allowed access from the FRONTEND and MIDDLEWARE segments to external networks (the Internet, for example).

From this image follows:

Forbidden accesses are indicated by red arrows in the image below: 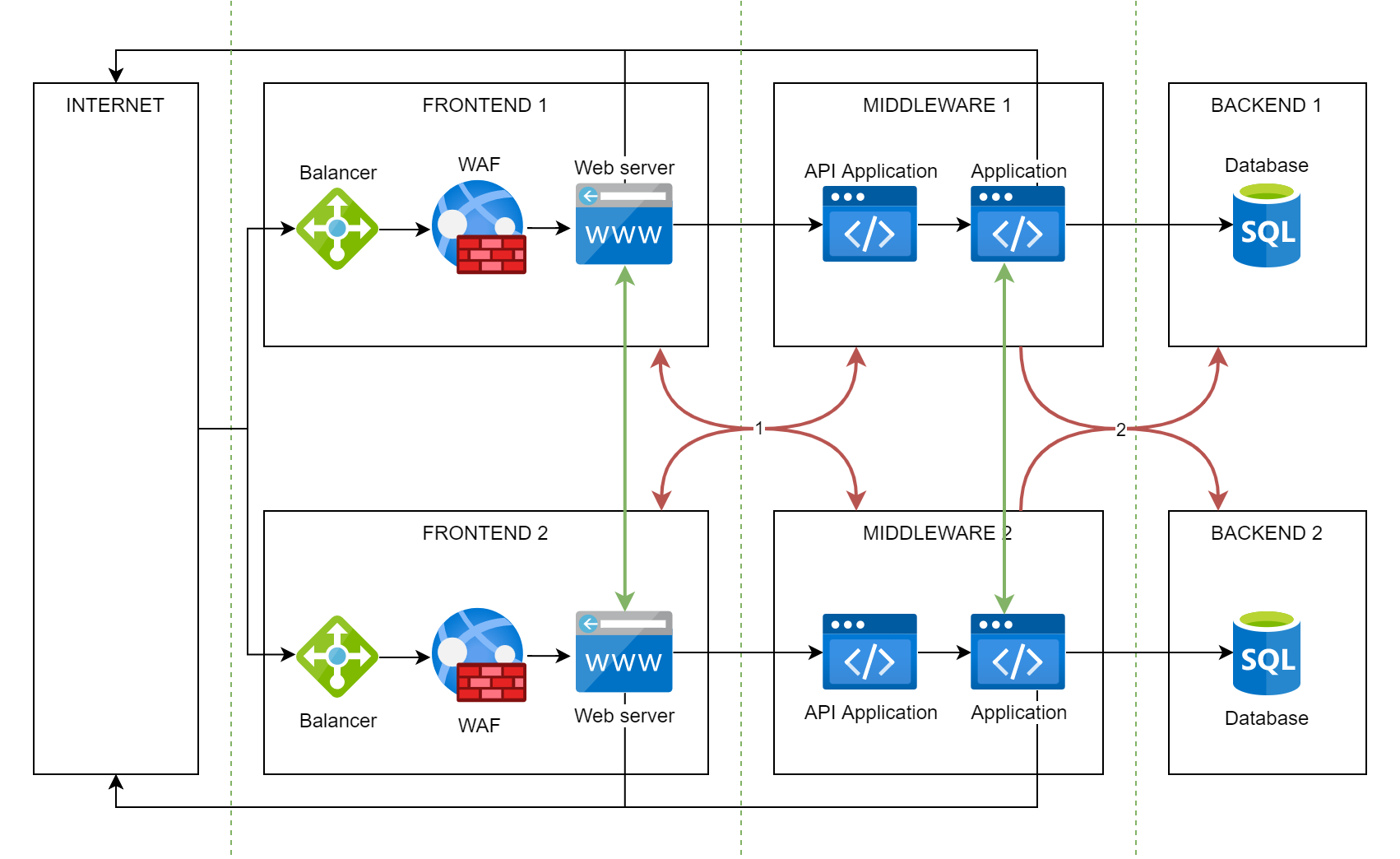 Many applications on the same network¶

If you prefer to have fewer networks in your organization and host more applications on each network, it is acceptable to host the load balancer on those networks. This balancer will balance traffic to applications on the network. In this case, it will be necessary to open one port to such a network, and balancing will be performed, for example, based on the HTTP request parameters. An example of such segmentation: 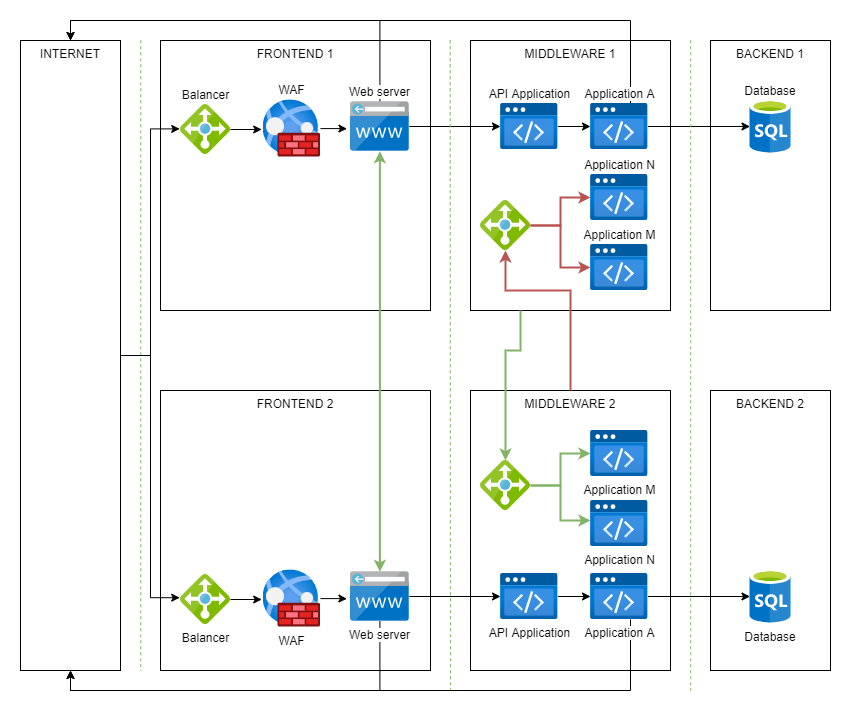 As you can see, there is only one incoming access to each network, access is opened up to the balancer in the network. However, in this case, segmentation no longer works, access control between applications from different network segments is performed at the 7th level of the OSI model using a balancer.

It is convenient when the policy is described by similar images. The information is presented as concisely and simply as possible.

Examples in the network policy will help colleagues quickly understand what access is potentially allowed and can be requested. 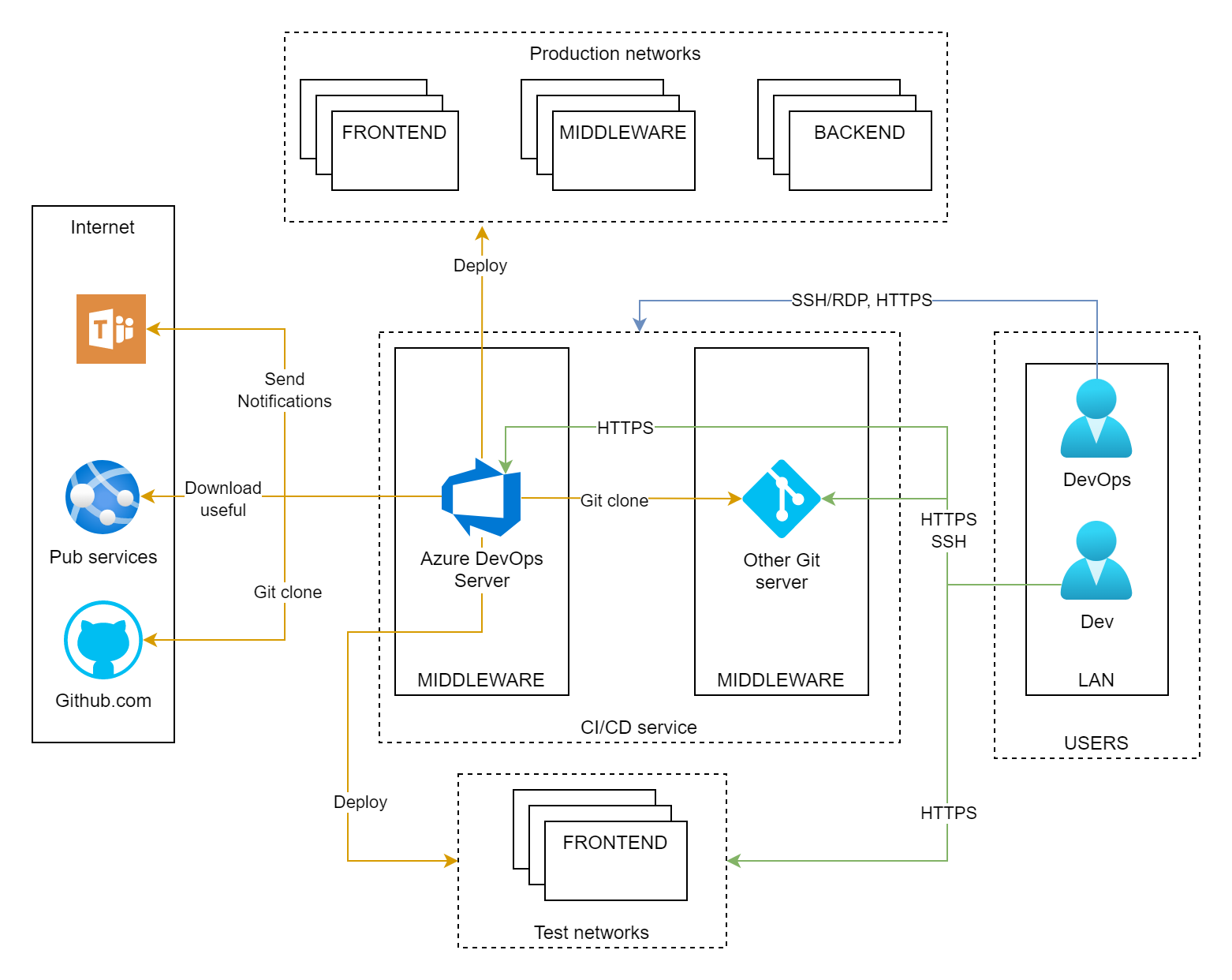 It is important that in the event of a compromise of any information system, its logs are not subsequently modified by an attacker. To do this, you can do the following: copy the logs to a separate server, for example, using the syslog protocol, which does not allow an attacker to modify the logs, syslog only allows you to add new events to the logs. The network security policy for this activity looks like this: 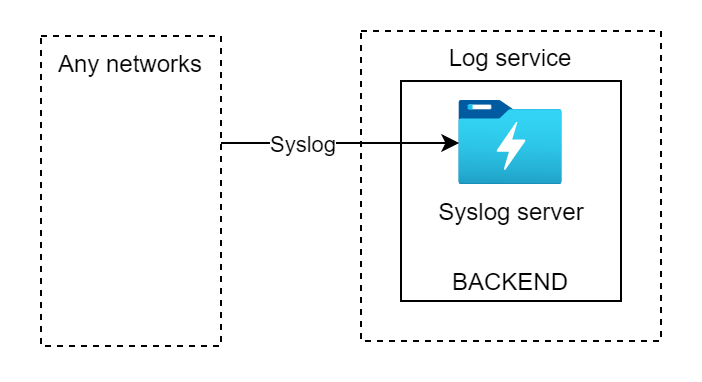 In this example, we are also talking about application logs that may contain security events, as well as potentially important events that may indicate an attack. 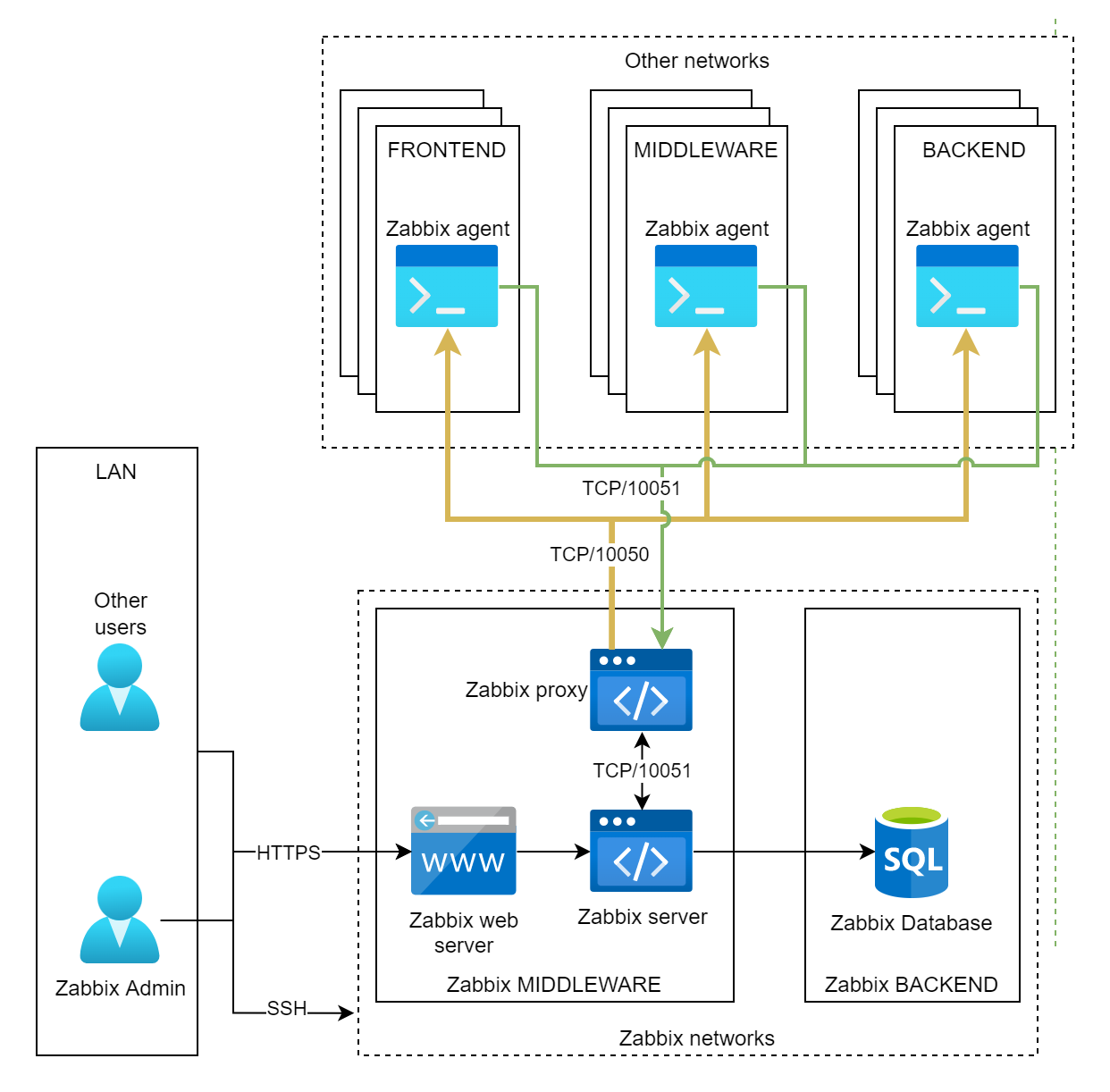